Search engine giant Google Celebrates 50 years of Kids Coding. On this occasion there is now an interactive Doodle, where you can help a rabbit to his carrots. 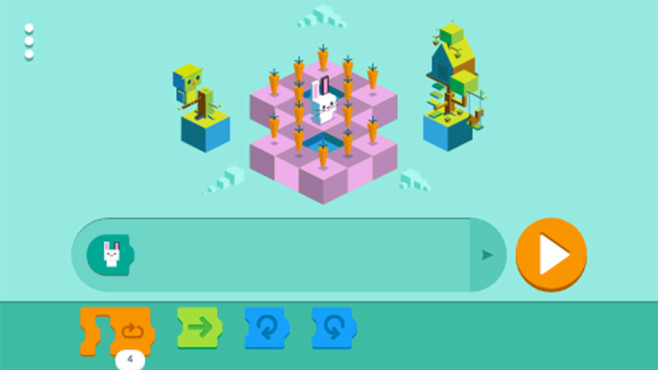 This week the Computer Science Education Week has started and right on Monday Google has published a little special feature: in the Doodle "Coding for Carrots" you can help a white rabbit on six levels in the search for his carrots. For this purpose, Coding blocks must be connected to each other in the designated bar. Only the correct order of Coding blocks controls the rabbit. The basis for this is the Scratch programming language.

Google Celebrates 50 years of Kids Coding
The idea is already over 50 years old. In the 1960s, when PCs were still far away, mathematician and educationalist Seymour Papert and researcher at the Massachusetts Institute of Technology (MIT) developed the Logo programming language – the first programming language specifically for children. Now the so-called "Kids Coding" celebrates its 50th birthday. Using Logo, children were able to program the Turtle graphic, where one or more virtual turtles can be moved across the screen. They draw colored lines behind them, which then form a kind of drawing.

Entry into the world of technology
At the beginning of Logo's development, the children were able to give the virtual turtles the opportunity to explore simple tasks in mathematics and other natural sciences. The developers pursued the idea that computers could be used by all children as a tool for learning. Boys and girls should thus find access to the then new technology. For today's Carrots-Doodle, three Teams worked together: the Doodle Team, the developers of the programming language Blockly, which is used in "Coding for Carrots", and researchers from MIT.