Programming: Python stays in the lead 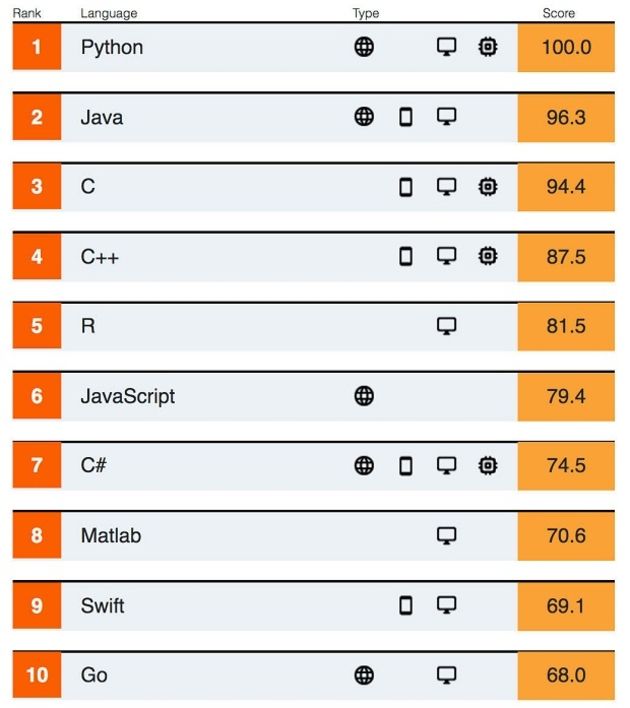 Python is ranked first in the most recent annual ranking of programming languages by IEEE Spectrum magazine.

The purpose of the ranking is to help developers understand what popular languages are in a world where no one really knows what programmers are using.

IEEE Spectrum placed Python in first place since 2017, just ahead of C ++ since last year. Python is assigned a score of 100 and all languages with lower scores are scaled relative to it. Last year, C ++ had reached 99.7, followed by Java with 97.5 and C with 96.7.

Today, in the sixth annual ranking of the IEEE Spectrum, Python is well ahead of the score of 96.3 obtained by Java, while C is third with 94.4. C ++ ranked fourth with 87.5, while specialized computer language R ranked fifth with a score of 81.5.

He cites the Keras library, which provides an interface to the TensorFlow developed by Google, the CNTK (Microsoft Cognitive Toolkit), and the Theano library, dedicated to deep learning.

Another area that has emerged in the years following Python's first publication in 1991 is that of Adafruit microcontrollers, as well as cheap small computers like the Raspberry Pi.

IEEE Spectrum notes that the default weighting of its list is optimized for "the typical Spectrum audience", which could explain the presence of Matlab in this ranking. He notes that Matlab's high ranking may surprise some, but "simply reflects the importance of this language in material engineering."

The ranking is based on 11 measures from eight sources, including CareerBuilder, Google, GitHub, Hacker News, IEEE, Reddit, Stack Overflow and Twitter.

Another bell sounds
Tiobe, which has its own classification index of languages based on several search engines, has also published its results for September 2019.

A notable change in this month's standings is affecting PHP, which seems about to lose its place in the top 10 of Tiobe where it held a place since 2001.

"PHP was originally the Visual Basic of Web design: easy to learn, easy to deploy, but mainly used by Web designers with limited training in software engineering. The downside of PHP's simplicity was that it was easy to leave security holes, " noted Tiobe analysts.

They continue by noting that Facebook, which was originally built with PHP, launched its alternative to PHP, Hack, in 2014 and since then, JavaScript, TypeScript and Python have become the most popular languages for Web development.